How to Make Your Dream a Reality

Walt Disney was a dreamer.

First off, Walt had nothing given to him.

After a rough start to life, he came to Hollywood at the age of 22 with $40 in his pocket and one shirt.

In those early years, he developed the skill of being an animator, which basically meant he drew cartoons.

Walt Disney was the typical “starving artist”—very talented with a piece of paper and a pencil, but he didn’t know how to monetize his skills.

After multiple attempts with no luck at finding work in a studio, he said to himself, “If there is no work, I have to do something on my own!”

On October 16, 1923, Walt founded, along with his brother, “Disney Brothers Cartoon Studio”.

Back then it wasn’t one of the world’s most recognized brand, it was simply 2 brothers trying to make something work in a garage with a rented camera.

“This whole thing started with a dream” —Walt Disney

It was still just a dream at this point—and that dream needed to be sold to other people if the world would ever benefit from it.

Here’s how Walt Disney turned his dream into reality: 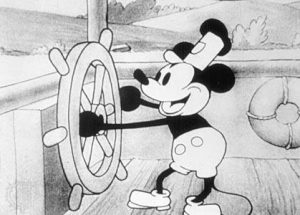 The original name for the mouse wasn’t Mickey.

“Mortimer Mouse” was the name before Walt’s wife convinced him to change it.

On May 15, 1928 Walt released his first screening of Mickey Mouse, but the audience didn’t respond positively.

He gave it another try later in the year but the cartoon was never released because he couldn’t find a distributor for it.

The key is, he didn’t give up—he continued producing.

He went back to the drawing board (literally) and that November came up with another short, animated film that featured Mickey the cartoon character.

The 3rd time was a charm—this time he secured a distributor and Mickey Mouse began to get known to the masses for the first time. 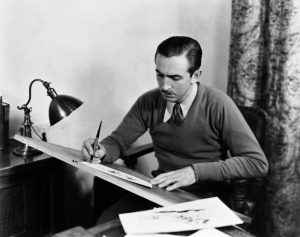 After some initial success, Walt knew that he must keep adding wood to his fire, because you can’t rest on yesterday’s success if you want future growth.

He hired more animators and his studio grew.

His first mega-hit came in 1937 with Snow White and the Seven Dwarfs.

Adjusted for inflation, it’s still one of the top-grossing films of all-time.

It not only was profitable, but it also made history as the world’s first full-length animated cartoon.

And it finally made Walt a millionaire.

To many on the outside, it looked like Walt Disney was an overnight success.

The truth is, Snow White and the Seven Dwarfs was 3 years in the making.

That’s a lot of late nights at the studio making drawings.

Walt’s personal investment into his business with his money, time, and efforts were beginning to give the world notice that he was serious about his dream.

#3 Selling Others on His Ideas 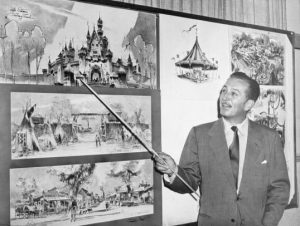 In 1948, Walt sent a memo detailing his plan for “Mickey Mouse Park.” He described Main Street, a cowboy town, and a carnival section.

His brother and partner, Roy Disney, disregarded it immediately.

The 1940s had brought World War 2 and the studio had racked up a large debt to the Bank of America since none of Disney’s postwar films had produced a profit.

The massive success of Snow White from a decade earlier seemed like a distant memory.

While the idea of creating a theme park stayed in Walt’s mind, the Disney Company only made $720K from $7 million in revenue in 1950.

With Disneyland estimated to cost between $10 million and $20 million dollars to build, the cost, relative to the company’s profits at the time, was huge.

In addition, at that time each Disney movie was costing between $1 million and $2 million—which was already pretty large relative to the company’s profits, not all of which would be converted into cash.

So, Walt Disney had a big sale to make:

How would he convince others to risk money to join him?

If your dream is big enough, you will need to raise money too.

At first, those closest to Walt told him a theme park was too much of a diversification move that was completely unrelated to what they were doing at the time, which was film making.

But Walt stuck with his dream and borrowed $50,000 of seed capital against his life insurance.

It was the limit of his personal borrowing ability…so, he sold his second home in Palm Springs for more cash.

The banks weren’t willing to lend him more money, so Walt flew across the country to talk to major network execs at CBS and NBC.

He spent months negotiating with the idea to give one of the TV networks an opportunity to invest in his new theme park in exchange for a weekly one hour Disney TV show.

Both CBS and NBC wouldn’t agree to the deal, but did Walt throw in the towel and give up?

Nope, he went to the up and coming 3rd network, ABC, and worked out a deal where ABC would become 34% owners of Disneyland and get exclusive TV rights to air Disney shows.

By the way—there is another lesson in this—and that is Walt didn’t treat TV as a threat even though it was a new platform that seemed to rival the film industry. He treated TV as an opportunity.

With $7 million raised and 34% of Disneyland given to ABC, Walt was on his way.

With cash to finance the park, crews began construction in Anaheim in the summer of 1954.

A giant orange grove began to morph into Disneyland—a park that was once only an idea in one man’s head was becoming a reality.

People still doubted him, saying that he lacked the real estate and commercial construction experience to bring this kind of idea to a good ending.

But Walt knew how to delegate.

He looked to hire the best of the best to help him build his vision—so he found a guy named Joe Fowler who was a retired navy shipbuilder.

Joe was known as “Mr. Can Do” for his ability to make any project work no matter how difficult…