What You Can Learn from Henry Ford

Henry Ford at one time in his life was simply known as a FAILED engineer.
His first two automobile companies had a short-lived history.
He tried to perfect each automobile he was making, and as a result of that, he was late on deliveries.
His financial backers lost faith in him and pulled out.
Henry couldn’t get his cars fine-tuned enough to produce and sell in quantities high enough to make a profit.
For example, his Quadricycle worked, but it wasn’t put together well for mass production. 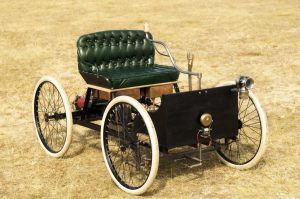 It’s one thing to create a great product, but it’s a whole different thing to be able to create a great product quickly and sell it profitably, over and over again.
But Ford kept at it, and even after two failed companies—the Detroit Automobile Company and the Henry Ford Company—he was able to find another financial backer to start yet a 3rd company—the Ford Motor Company.
By this time, he was getting better at figuring out assembly lines.
He brought in an expert to take care of the distribution and business matters so he could concentrate on the production.
His new “Model A” was beginning to sell, but it had many problems…but with feedback from his mechanics, he kept learning and improving.
After many, many failures and less than ideal cars, Ford was finally able to produce the “Model T”.
It became the bestselling car in history.
“Failure is simply the opportunity to begin again, this time more intelligently.” —Henry Ford
He produced the first car that many middle-class Americans could actually afford.
And by doing so, he got rich—billionaire rich.
Henry reached 10-figure status by 1925.
But even the super successful make mistakes.
One of Henry’s mistakes was his rubber factory in Brazil.
He spent millions of dollars setting up a plantation in the Brazilian rain forest to build a small town, hire the local natives, and start producing enough material to supply Ford’s internal demand for rubber, which included making tires for over 2,000,000 automobiles a year.
It seemed like a decent idea, as The Ford Motor Company in the 1920s pretty much controlled nearly every raw material that went into the making of a car—the glass, the iron, the wood, the lumber…everything except the latex.
And at the time, England and the Netherlands controlled the market for the world’s rubber production with multiple plants in the East Indies.
You always want as much control in business as possible, and the European-controlled rubber cartel artificially set high prices, which was a threat to Henry’s business interests.
As rubber prices went up, so did the cost of tires, gaskets, and tubes.
But what seems like a great idea can quickly turn into a financial disaster.
Drought and insects ravaged the trees, and the harvest was never what it needed to be.
None of Henry’s managers in Michigan knew anything about tropical agriculture, soil chemistry, or local pests and diseases in the Amazon rain forest.
The whole project failed miserably.
Meanwhile, Harvey Firestone started a rubber plantation around the same time in Africa.
While Ford used engineers and factory managers, Firestone put botanists, scientists, and plantation managers in charge.
Firestone’s plantation is still successful to this day.
Ford had more failures.
Again, Henry was wildly successful, so I’m not picking on him—I’m just highlighting some things we can learn from.
In 1918, half of all cars in America were Model Ts.
In the 1920s, he REFUSED to update the Model T car, which led to sales falling drastically.
While it’s true that you shouldn’t change what works, it’s also true that the market begins to communicate to you when something is no longer working.
You always have to stay innovative in business and look for ways to improve on even your best products and services.
Let me remind you that success is like a beautiful lawn or garden, no matter how green it gets or beautiful the flowers, you must continue to tend it.
If you quit mowing, edging, trimming, watering, and planting, it’ll fade and deteriorate until it ceases to exist.
This is what began to happen to the Ford company as they rested on the past success of the Model T.
Ford famously once said that customers could own a car in any color as long as it was black.
No matter how good a product is, especially when it’s something technologically new, it will eventually become obsolete and be perceived as outdated.
See typewriters, old computers, first-generation cell phones, non-flat screen TVs, CDs and records, and floppy disks.
What is once new and desired quickly can become old and outdated.
The same concept began to happen with the Model T.
Other car companies were coming out with newer and more attractive models.
Meanwhile, to make matters worse, Henry had a strong belief at the time that paid advertising was a waste of money.
“If you really have a good thing, it will advertise itself.” —Henry Ford
While it’s true that much of your advertising and promotion should be free and organic, and the high quality of your product or service should advertise itself, you still must advertise if you want to expand big and fast.
Henry Ford was hugely successful, but I imagine he limited his own success by thinking that advertising would just happen by itself.
Imagine the growth of the company if Ford aggressively promoted and advertised while also coming out with newer models sooner.
For years, I grew my business without paid advertising—and I now realize that this held me back from greater success sooner.
But despite Henry Ford’s mistakes, he was one of the most successful businessmen of all time.
That’s the thing about success—you can have MANY failures, but ONE huge success can overshadow all your shortcomings.

Looking back over my own life, I’ve made plenty of mistakes, but the key is to make your success LARGER than any single setback.
Henry Ford created so much success that…
• Nobody remembers his first two failed companies.
• Nobody remembers the Brazilian rubber plantation debacle.
• And nobody remembers that the Model T wasn’t updated for far too long.
Here’s what we do remember—Henry Ford changed the automobile industry, created BILLIONS of dollars and helped support a growing and vibrant city—Detroit, with wages that were higher than what any other factories paid at the time.
How did he accomplish everything he did?
Here’s one quote that speaks volumes to me:
“It has been my observation that most people get ahead during the time that others waste.” —Henry Ford
If you take anything from the life and lessons of Henry Ford today, remember that what you do during your evenings and weekends…while others are relaxing and doing nothing, are exactly the time you can be getting ahead.
I created Cardone University as a business tool to help you succeed big in life—and just 10 minutes a day can produce life-changing results.
“There is no man living who isn’t capable of doing more than he thinks he can do.” —Henry Ford
If you’re ready to find your potential…CLICK HERE.
—Grant