WHAT IT REALLY TAKES TO BUILD AN EMPIRE

A quick story that you may have learned in history class… but the teacher probably never told you the real lesson you can actually learn from it.

In 334 B.C., Alexander the Great set sail on a fleet of Greek ships to a narrow waterway in a part of modern-day Turkey called the Dardanelles.

Crossing this small strip of water was a BIG deal…

Because the Persian empire was on the other side.

After Alexander sailed across, he instructed his men to BURN all their ships.

“We either return home in Persian ships or we will die here.”

That was the message.

Suddenly, for every man in that army, FAILURE was not an option.

That’s why they stretched all the way to India and came back with more than just ships…but the entire Persian empire in their possession.

Caesar, much like Alexander the Great, had a body of water to cross that would seal a commitment.

The Roman Senate had forbidden Army generals from bringing their armies across the Rubicon river in order to prevent coups in Rome.

Crossing the Rubicon into the Italian republic would be punishable by death—likely a very painful one.

Yet, Caesar, according to a Roman historian, simply said, “The die is cast” as he crossed over the Rubicon—so he knew full well that it was now victory or death. 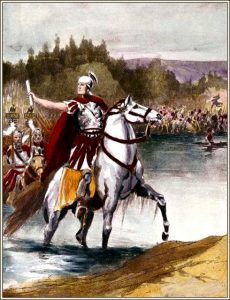 Once you crossed the river, there was no turning back…

Cast your die…and cross your Rubicon!

What is your biggest challenge?

Every problem has a solution, and often the solution is YOU simply making a commitment and going all-in.

I remember when I started with social media I posted maybe once a day.

Some of my friends even suggested I back off.

That is when I woke up and came to my senses and I crossed the “Social Media Rubicon” by deciding not to fly under the radar any longer — and instead of backing off, I commanded my staff to go 10X.

I increased the number of posts to 10X what I had been doing.

Sometimes problems are only solved by bold actions.

Almost every problem people face in their careers and other aspects of their lives — such as failed diets, marriages, and financial problems — are all the result of NOT taking enough bold action.

Most of society discourages the all-in mentality because we are taught to play it safe, protecting ourselves from losses rather than going for the big payoff…but some challenges in life can’t be played safe.

All that said, there is another side to it.

While I am all about going “10X” and being like Alexander the Great or Caesar and going ALL-IN, there is RISK in that.

When you risk big, you can lose big. 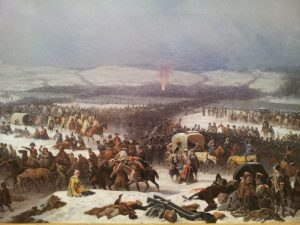 Unlike the Rubicon with Caesar or the Dardanelles with Alexander the Great which represents ADVANCE and conquer, the Berezina is a river that represents RETREAT.

When Napoleon invaded Russia in 1812, the Russians let them advance all the way to Moscow…then they set fire to their own city.

With few supplies and winter setting in, the French realized it was a trap. Retreating, French soldiers began to starve and freeze to death as the army made it back to the Berezina river in modern-day Belarus.

With the freezing cold and an army quickly advancing on them, men sacrificed themselves by stripping off their heavy clothes and building a bridge. Many of them froze in the water as hypothermia set in, but the bridge was soon completed and a small remnant of soldiers were able to cross back on dry land.

But by that point, Napoleon’s empire was in retreat.

They went ALL-IN and lost.

That’s why I want to warn you today that while I tell you to go ALL-IN, there are consequences to that decision.

I’ve gone all-in on certain things in my life:

These decisions have given me my biggest victories in life.

But I have gone all-in and lost too.

But when you go all-in, the wins are so big, it’s far riskier to never take a swing—even if you miss.

So, keep in mind that YOUR EMPIRE will only be as big as you are willing to risk!

To victors belong the spoils,